About the author, Tom Mead 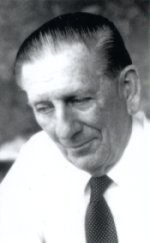 A newspaper journalist for more than 50 years and an author for as much of that time as he could manage in a busy newspaper and parliamentary career, Tom Mead saw far more in his fascinating life than most people.

Tom began his journalistic career as a reporter on country newspapers then, in the days of Prime Ministers Menzies, Curtin and Chifley, Tom saw Australia’s history unfold from his desk as a reporter in the Canberra Press Gallery.

Many of the stories Tom wrote for newspapers were important records of Australian history including the last minute obituary Tom wrote for Ben Chifley on the night he died in 1951, scrambled together largely from Tom’s own knowledge of Ben Chifley, in time to make the leader Page of the morning’s first edition. The dramatic story of how this came to happen is recalled in detail in the book “Breaking The News”. The enthralling true story of the killer whales of Twofold Bay told in the book “Killers Of Eden” was discovered by Tom while on a reporting assignment on the NSW south coast.

Later, with the Sydney Daily Telegraph, Tom was a special writer, music critic, sub-editor and Chief of Staff before being given the exciting challenge of designing and building from scratch a new generation of big regional suburban newspapers for Sydney.

A parliamentary career followed when in 1965, Tom entered state parliament and served for 11 years as the Member for Hurstville in the NSW Legislative Assembly, once again experiencing history from a ringside seat.

After parliament Tom returned to newspapers, ending his career in Sydney as Chairman Of Directors at The Manly Daily. Sadly, Tom passed away in 2004 but Tom’s love of literature, history and the sea live on in his books, recording fascinating stories worth preserving before they are lost to future generations.

The price of war - plus the odd tin of bickies
Tony Stephens, Sydney Morning Herald September 1, 1998