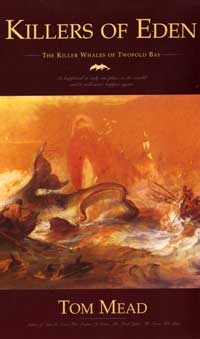 The killer whales of Twofold Bay

An amazing story of killer whales is told in the book Killers of Eden by Sydney journalist Tom Mead. For almost a hundred years the same pack of killers returned to Eden, on Twofold Bay, NSW, assisting local fisherman during the winter whaling season. These killers would actually herd whales into the bay, when necessary attracting the land-based whalemen. As the boats put out from the shore, one killer would lead them to where the rest of the pack had surrounded the whale, working much as sheep dogs do for drovers. After the kill the pack claimed the dead whale's tongue and lips as reward, the fishermen removing the rest of the carcass a few days later.

The killers became local legend and the fishermen, who knew each one by his individual characteristics, dubbed them with such distinctive names as Stranger and Humpy. Old Tom, the leader, whose skeleton is preserved at Eden, was remarkable for his organising ability.

Three generations of the Davidson family used the friendly killers while whaling in Twofold Bay. When the last one died in 1930 George Davidson went out of business, for he had lost his most valuable asset. Such voluntary co-operation between man and another species for so long a period defies explanation and must be one of the most unusual cases ever recorded.