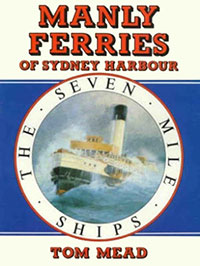 Manly Ferries of Sydney Harbour tells of the early paddlewheeler days, the era of the Port Jackson & Manly Steamship Company that brought the Dee Why, Curl Curl and South Steyne, the decline of the ferries and their recent return to popularity. But it is also a human story, relating the dramatic events that happened to the ships and the men who manned them and the people behind the long battle to save the greatest of them all — the South Steyne.

Enriched with superb paintings by John Allcot and Fred Elliott and a marvellous selection of photographs depicting all facets of ferry travel to and from Manly since the beginning of the tourist trade this nostalgic book brings to life the old saying ’Manly - seven miles from Sydney and a thousand miles from care.’